I'm feeling a little bit like I've had a spell cast upon me by the weather witch. Whenever I am doing something that I don't want to do but I need to do then the sun is shining, but when I am wanting to do something I want to do then the rain starts to drum down.

Every time I put on my Allotment gear ready for a trip, the heavens open. Oh well, we are getting up to pick bits and bobs and we've had marrows, runner beans and french beans in plentiful supply. The courgette glut is almost over, they are definately slowing down now and the picking isn't as heavy or frequent. However, there is still plenty to eat and we certainly aren't going hungry as you can see in the next picture which shows some recently prepared Mediteranean inspired potatoes and roasted vegetables.... 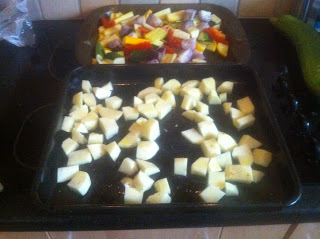 I really need to get a move on with a few things though. The winter cabbage seeds really should have been sown last week, but will have to cope with a week less of growing time and I am sure they will. Linda also asked about a how to grow perfect cabbages guide, so that will be coming up when it's time to put the spring cabbage plants out.

On an interesting note, we're dabbling our hand at... showing vegetables. Apparently there is a local vegetable show on September 1st, Amy picked up a leaflet in one of the local shops. It's all a bit spontaneous but we are entering 4 categories. We know our veg isn't perfect, simply because it was never intended that it would be, if it was good to eat that was good for us. But we will be challenging for the honour of the largest marrow along with contending in the classes for courgettes, runner beans and french beans. Keep your fingers crossed for us.

I have also started my new job this week at a college in South Birmingham. It is a beautiful college with fantastic gardens and if I get permission I will be regularly taking photos and posting them here. They have their own veg patch and the food is used in the kitchens and so far so good. I am working in a marketing position and one of the things I am looking forward to is the first ever 'Open Gardens' at the college, where hopefully we'll be inviting the general public in to the grounds for the first time to view the beautiful collection of plants and trees that we have there. There is also a large ornamental pond and orchard. It's just great and I am really enjoying it.

However, due to the increase in my working hours there is obvioulsy less time for blogging, so I'm working on several social media streams including Facebook to bring you short, snappy updates as opposed to large posts. However as Friday is my day off I hope that Friday's will be my regular allotment and blogging day. So hopefully it will be something for me to look forward to at the end of my week and also give you a good read for the weekend.

Amy also works on Thursday evenings so until the night's do really pull in, I'll be visiting the allotment then too, but how many weeks of light evening's we have left is surely limited.  You might be lucky to see some photos tomorrow. But only if you are lucky.

Have a great day!

It's a funny month. After all your hard work some vegetables growth comes to end like the potatoes and the onions and others really just start to kick in like th runner beans and courgettes.

We currently have courgettes and marrows coming out of our ears. My favourite thing to do with them at the moment is to make mediterranean style vegetables using red onion, courgettes and pepers. Simply delicious! We will be having that tonight with some burgers.

Like I've just said the runner beans are starting to come on leaps and bounds and due to them being so late this year we have only just picked our first of the year today. I would normally expect them by mid July at the latest, but rather late than never as they say. Here''s a picture of today's harvest anyway... 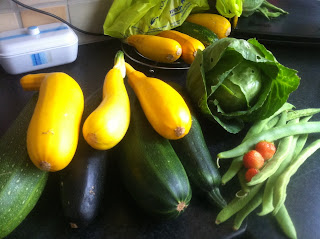 The Maris Piper gave us a really good crop of potatoes. The charlotte first earlies were sensational and our maincrop aren't bad. Blight was quickly spreading over many fellow allotment holders crops so I thought it was best to get them out of the ground straight away. It might have been better to give them another couple of weeks to bulk up but overall we have about 25kg which will suit us perfectly.

So now there are no potatoes there is a huge empty bed on the left and on the right is another where the onions took up residence. The onions were pretty poor and out of the 40 or so maincrop onions we planted only about a dozen are worth keeping. The shallots we planted in May were'nt too bad so this is something to remember for next time! All of the alliums we are harvested are currently hanging on the washing line at Amy's house.. 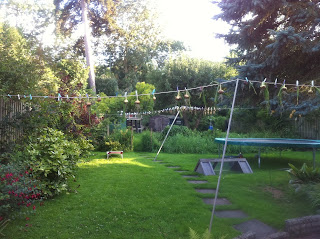 
The produce keeps coming and we are eating fresh vegetables daily. The first cabbage has turned in to the second, third, fourth and fifth so we are doing very well.

I would like to catch up on my blog reading, but with starting a new job next week it is very difficult to do as much as I would like and that does include getting up to the allotment. As you can see in the next picture some areas look like a pit of weeds. Never mind...

Although I must add that a lot of the plots on our site are 'occupied' but people have done a little bit and then let the weeds completly takeover so it is an absolute constant battle. The two allotments to our left were 5ft high with weeds before he came and strimmed the lot (including the veg he had planted) last weekend. There are about 7 allotments which are completly covered with weeds on our site. I wish the council would do something about it! 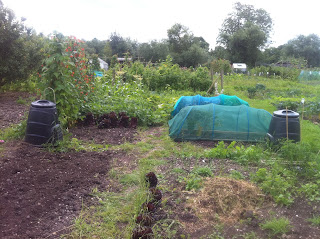 There is plenty to do when I do get some time, I need to plant the Christmas new potatoes and sow some spring cabbage seeds too! Plenty to be done in preperation for winter in August, so I better get shifting and that includes shifting horse manure on to the two empty beds which will be occupied by beans and pumpkins next year, so the more manure the better!!

Thankyou as always for reading. I hope your harvest is as good as ours. Will do some reading of your blogs before bedtime too, I promise!!

Ooohh and I almost forgot. We have grapes forming too... 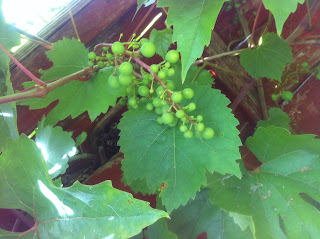 Well Gold is definately this month's colour. With the unprecendeted number of olympic gold medals being won by Team Gb, and also the prospect of Golden Sunshine this week things are starting to look good again. We've also been digging up some Gold treasure down the allotment in the form of our maincrop potatoes. We took advantage of the mid-day sunshine to dig up a row of our main crop Maris Piper's. I was expecting them to be a good size for Jacket Potatoes and also for mashing but in reality the size varied greatly with small to medium potatoes and then the occasional whopper. We decided to only harvest the one row and have left the other 5 for next week! 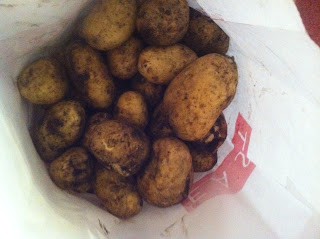 We easily got 5-6kg off the small row. Our rows are only about 1/3 of the size of the allotment's width so it was a very good haul indeed.

The rain in recent weeks has ruined crops such as onions and shallots, but it seems to be doing the majority of the cucurbit family a world of good. We've had Golden Yellow courgettes to pick daily and the monstrous marrows keep coming too. Here's a picture of our marrow and courgette harvest from one day last week. This was a particularly bumper day but we are picking at least 3 courgettes per day... 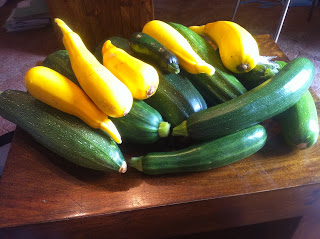 The Pumpkin patch is also looking great too. We have at least 6 pumpkins which have set and are forming nicely. A couple of the hundredweight variety are already past an acceptable size for a jack o'lantern at halloween and seein as they have the best part of 2 months left to grow then we shall see what they are going to do. It could all be very exciting... 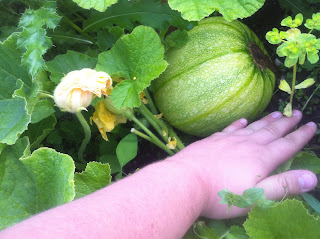 After 6 years of trying, this week brought me one of my greatest triumphs as a vegetable grower. I finally managed to grow, harvest and eat one of my own cabbages. I had told Amy that for years I have failed to get my cabbages to heart properly, they have always ended up with open leaves and not tight hearts. Well this year I changed my growing method slightly and I now have 2 rows of perfectly hearted cabbages and delicious they are too. I bet you think I can't keep up my gold theme now, well I kid you not but this variety of cabbage is called 'Golden Acre'.. 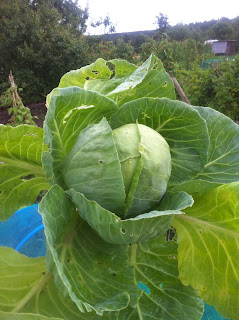 I am very pleased with the final results. I had said that if they didn't grow properly this year then I might give up on brassicas next year. However, this delicacy has given me some hope at least. Sods law indicates that they will not heart properly next year, but I will try!

The allotment is abundent with growing produce and plenty of weeds too. The forecast is good for the rest of the week so I shall be going up to tidy everything up. As we harvest these cabbages it is a good reminder that it is time to sow some for spring time. I will be doing that in the next week or so, as I continue to plan for next years 'hungry gap' already.

On my way back from the allotment today, I popped by my town's new golden glory... 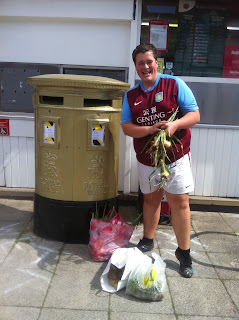 With 3 bags of produce in tow, I think they probably thought I was coming to sell it to passers by, but in reality I was only getting a picture for my loyal followers, who keep coming back to read my blog even when my posts are slightly infrequent.

The post box outside our post office has been painted Gold as a result of the success of local equestrian rider Nick Skelton who won a Gold medal in the team event at the London 2012 olympics.

Well done Nick and thanks to everyone else for reading.

I am way behind on blog reading but I hope your harvest are as good as ours.