At least it's not this bad..

Last night's allotment trip was an absolute wash out and continues with the theory that I am cursed. Anyway, I did manage to cover up 2 of the beds which were this year occupied by onions and potatoes. Before covering them I raked in a sack of compost for each bed. They'll get some well rotted manure and soil improver come the spring. Anyway this washout gives me a chance to share something with you that really get's on my nerves.....

This is the biggest plot on our site and look at the state of it! 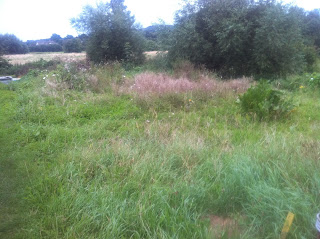 Apparently it used to be held by 'Barry Trout' who won the Best Kept Allotment competition every single year! He grew the biggest pumpkins, tastiest onions and was the awe of the site. Unfortunately when he died, his family took over the lease and have not bothered with it since due to their own unfortunate circumstances which I won't go in to. It is a real shame, it is the size of 2 of our plots and it overlooks the river and part of the cow field. I hope that somebody takes it over next year and restores it to it's former glory. It's a shame that the local town council don't do something about it. There are genuine people on the waiting list and this double plot is untouched and has been for years. It could have been ours if somebody had sorted it out when we were on the waiting list.

I often get a little depressed about the state of weeds on our allotment, but at least it doesn't look like this plot. Everyone has struggled with weeds this year due to being unable to get to the plots between heavy rain and even thunder storms.

Martin
Posted by Martin and Amy at 19:30

Thankyou for taking the time to visit our blog! Please leave a comment we love reading every single one of them!